Backpacking the Grand Tetons means late sunsets, big northern skies and a diverse variety of wildlife.  A must hiking trip for every back country enthusiast.  We loved backpacking the Grand Tetons so much, that we hiked it twice in 3 years.  The first time we flew into Idaho Falls and took a 2 hour bus ride into Jackson.  The second time, airline prices dropped enough to make it affordable to fly directly into Jackson.  Investigate both ways.  It's easier to fly into Jackson but if cost is an issue, the Idaho Falls route may be much cheaper. 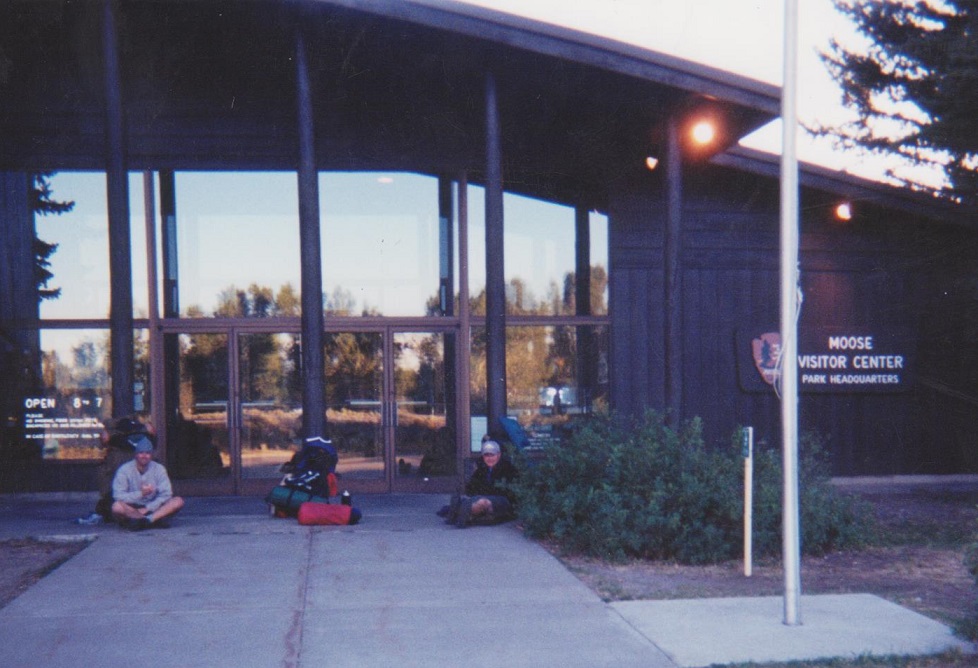 We give ourselves at least a day to enjoy the city of Jackson and get a Buffalo Burger and a beer at the Million Dollar Cowboy Bar.  It's a unique country bar.  It usually has a live country band and all the bar stools are saddles.  We'll try and get our permits taken care of at the Moose Visitor Center Park Headquarters during this day so we can avoid having to do it on a scheduled hike day.  If we get it a day early and finish that process, we can start hiking first thing in the morning.

Another reason we like to have a day in town before we start hiking, is it's a good idea to acclimated.  We just came from sea level and our first night on the mountain is at a lake at 8600ft.  A night in Jackson, which sits at 6200ft, would do wonders to help us avoid any of the effects that occur from a sudden altitude change.

The closest trailhead is several miles out of town so you'll need to get a ride.  There are plenty of drivers in town that make a living shuttling trekkers that are interested in backpacking the Grand Tetons.  You can have them take you the night before and sleep at the trailhead or arrange an early morning pick-up time from your hotel.  It isn't the cheapest ride either.  We paid between $50-100 for each way for 3 people and 3 large packs. Granted the starting trailhead we picked was Leigh Lake Trailhead, the furthest out of town.  Our plan was to start North and hike South past the backside of the Tetons. 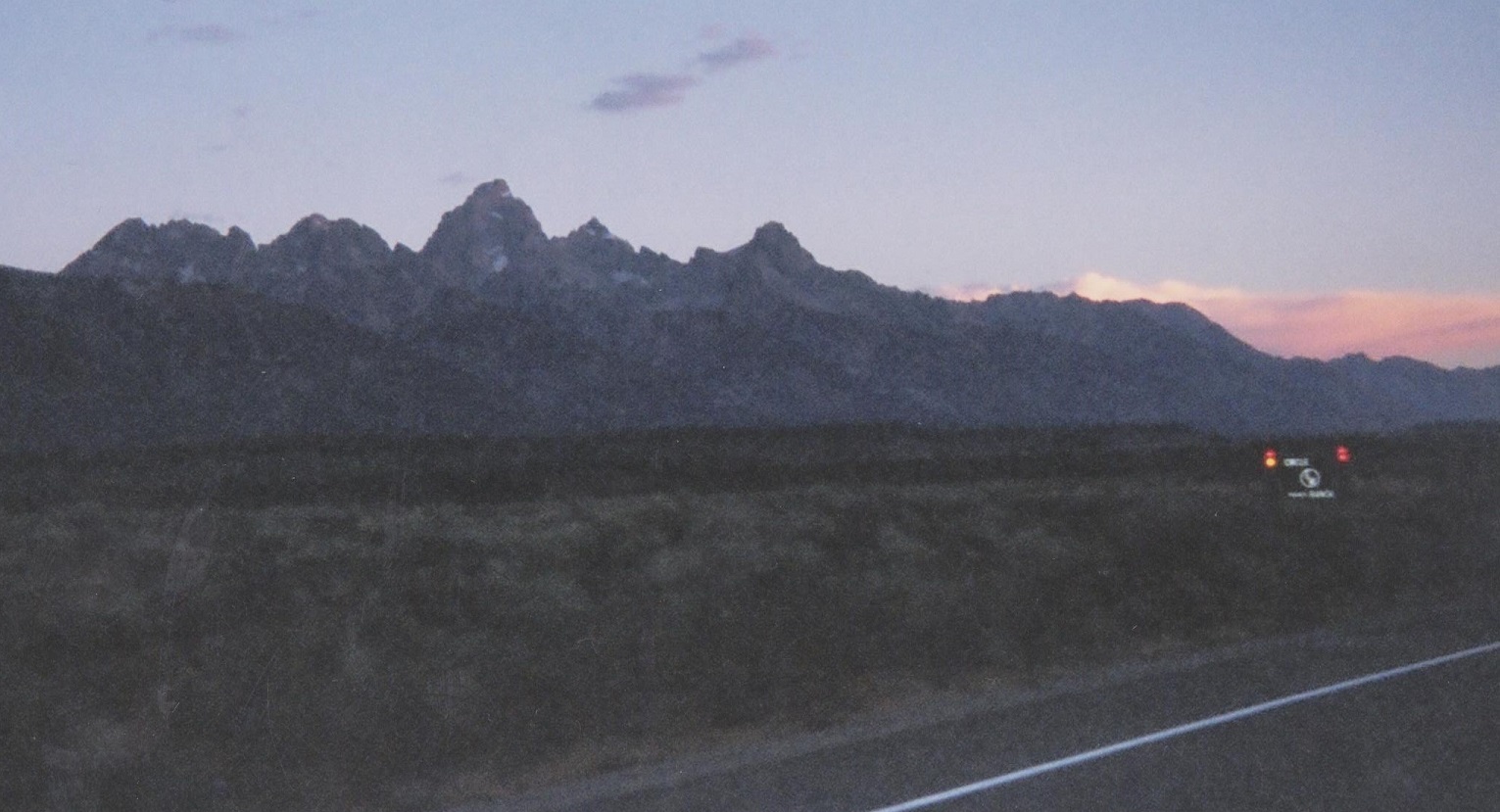 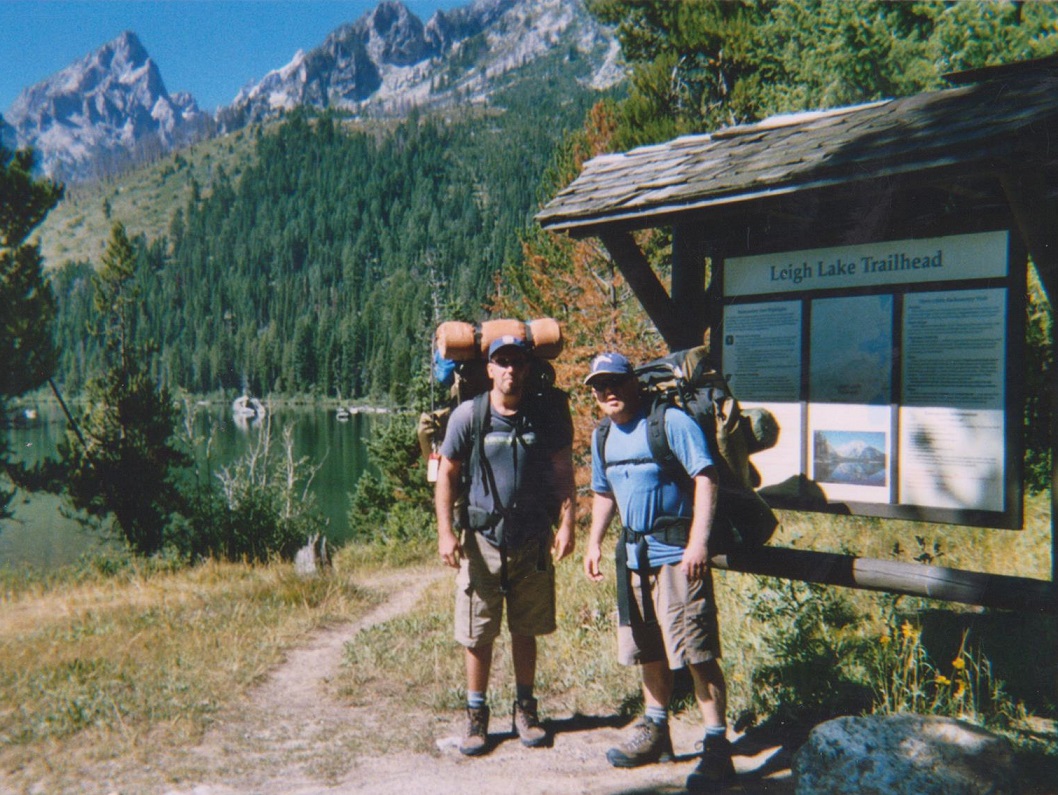 The ride to the trailhead from Jackson is gorgeous.  You drive on the valley floor of Jackson Hole right next to the Snake River.  Groups of Bison roam the grass plains, we had a couple early morning Moose sightings, with Bald and Golden Eagles circling over the Snake River looking for a fish breakfast.  In the morning twilight, the mountains silhouette rises up thousands of feet from the valley floor on the right side of the car.  The first sign of light is the sunrise hitting and exposing the highest points of the range, the Tetons!  It's an amazing sight.

We get dropped off and start our hike from the Leigh Lake Trailhead to Holly Lake.  The day isn't crazy tough, it's only 6.5 miles up almost 1600ft.  But the first day of any backpacking trip is strenuous since your pack is the heaviest, it's all uphill, you're still getting used to the lack of oxygen at the new elevation and our hiking muscles haven't been used since last year. 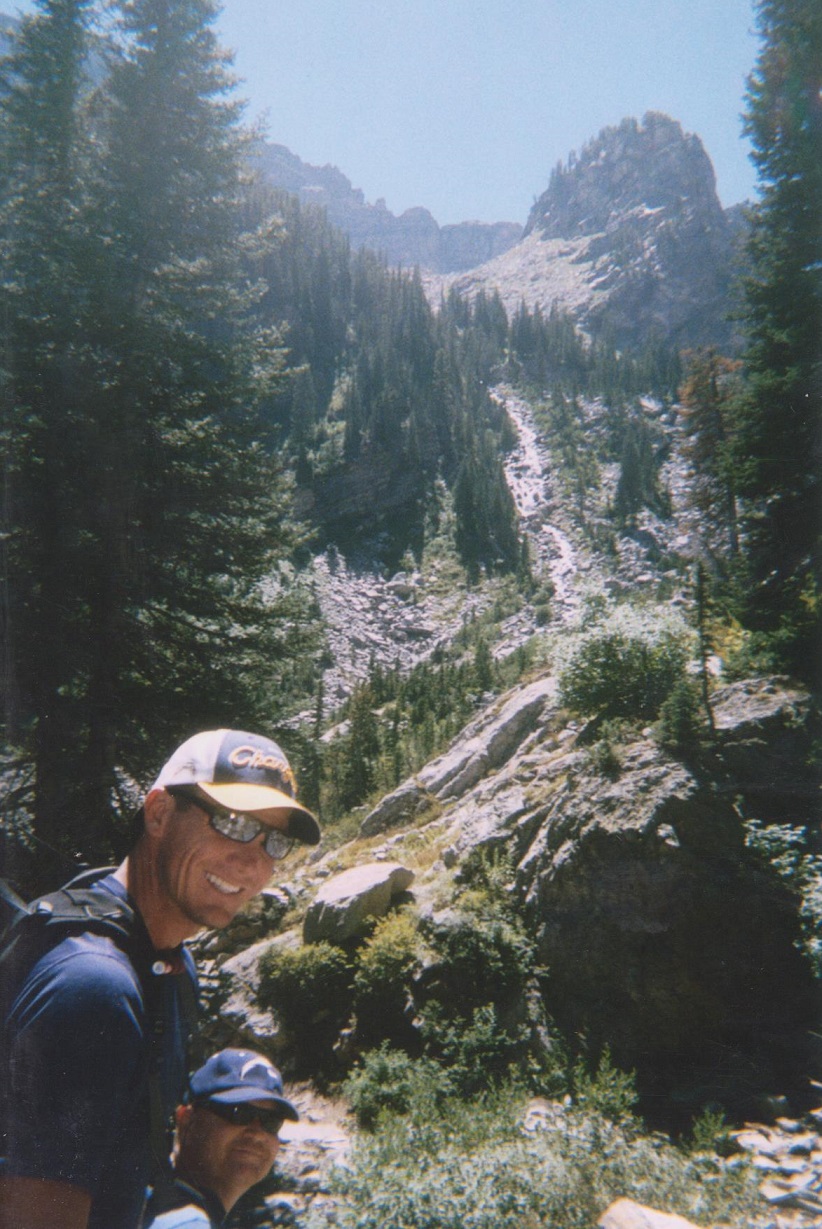 The second day is focused on getting over the pass and getting into the back country.  It seems to be the road map for all our backpacking trips.  Take down a majority of the elevation the first day, get as close to the pass as possible and then take it down the following morning.  The rule of thumb in the mountains is to get done with passes by noon, since you don't want to be on them when afternoon thunderclouds roll in.

The days plan is to break camp at Holly Lake, continue hiking up Paintbrush Canyon another 1.7 miles to the pass at Paintbrush Divide.  Paintbrush Canyon is exactly like it sounds.  A beautiful, plethora of different colored rocks and plants all mixed together that line the canyon walls as we ascend. 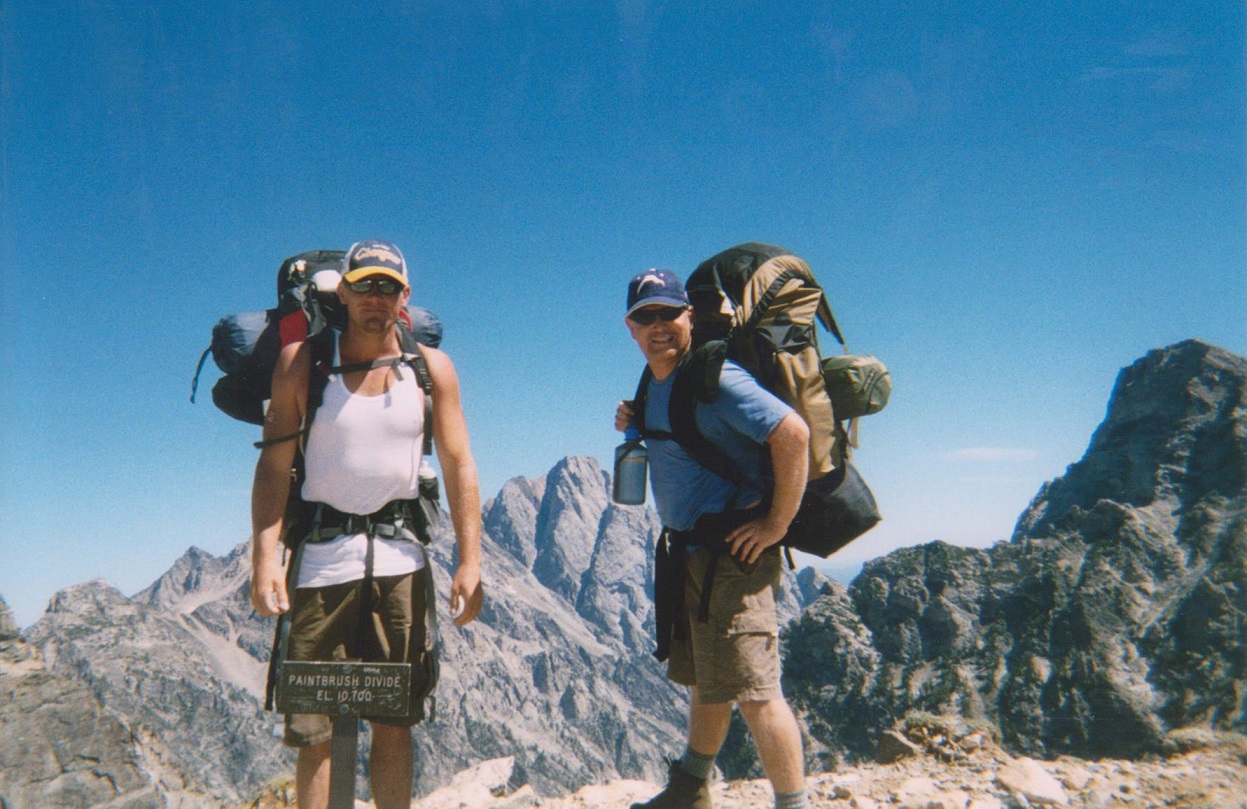 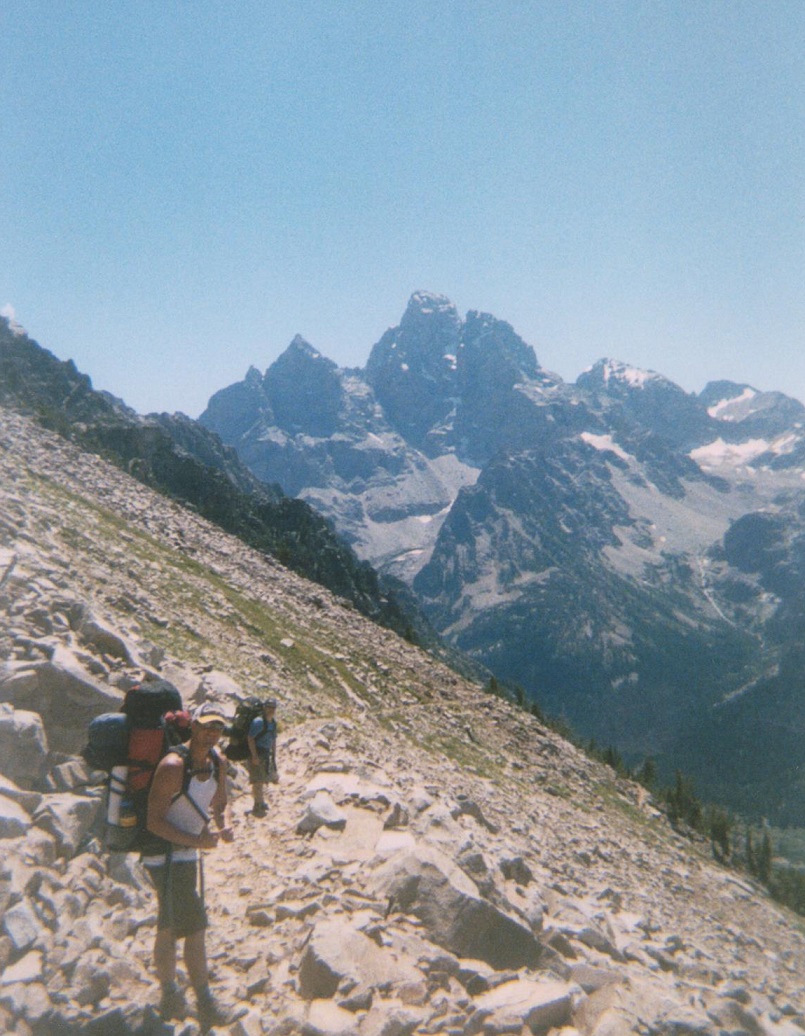 Hiking down into Cascade Canyon

We'll hike down just another 2.4 miles into Cascade Canyon.  It's a pretty short day, which is by design.  After 2 days of all uphill and a fully loaded pack, our shoulders and feet are screaming.  We accomplished what we wanted and made it into the back country on the 2nd day.  We can start enjoying the perks with being on the other side of the pass; good fishing at high elevation lakes with few people.  The hike down into Cascade gives us amazing, unobstructed views of the Tetons the entire way down. We make camp at Lake Solitude, the lake at the base of the Divide on the other side.  As our usual custom the night before a layover day, after we made camp and had dinner, we made a few Grogs of Mead.  Our Mead this trip was in the form of Hot Apple Cider and Rum! Mmmmmm.....

Lake Solitude sits on a high plateau on top of the north fork of Cascade Canyon with a perfect view of the Grand Tetons.  Its the perfect campsite for views of the first and last light of the day hitting the Tetons.  We made camp right between the lake and the Tetons and spent our layover day doing choirs, fishing and just sitting and watching the Tetons.  We knew we would lose sight of them for a few days after we take Hurricane Pass tomorrow. 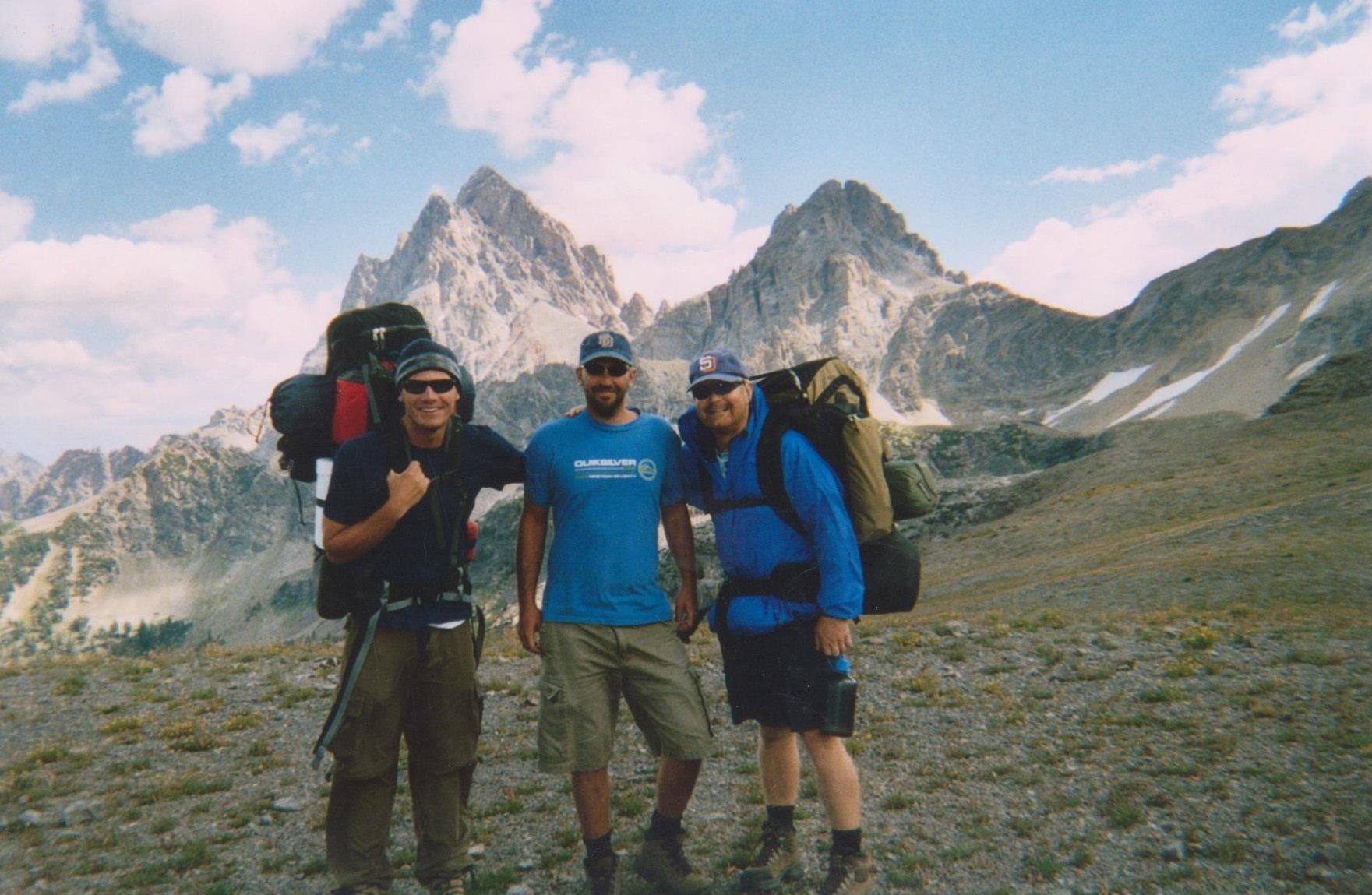 We pack-up and begin descending down the north fork of Cascade Canyon for 2.7 miles until we reach the fork junction. After the fork junction, we begin a 5.1 mile, 2000ft climb up the south fork of Cascade Canyon.  The trail cuts right behind the backside of the Tetons as it works it's way up to Hurricane Pass.  It's always a pleasant surprise after climbing a steep pass, to find on the other side a high elevation meadow. That's exactly what Hurricane pass was. 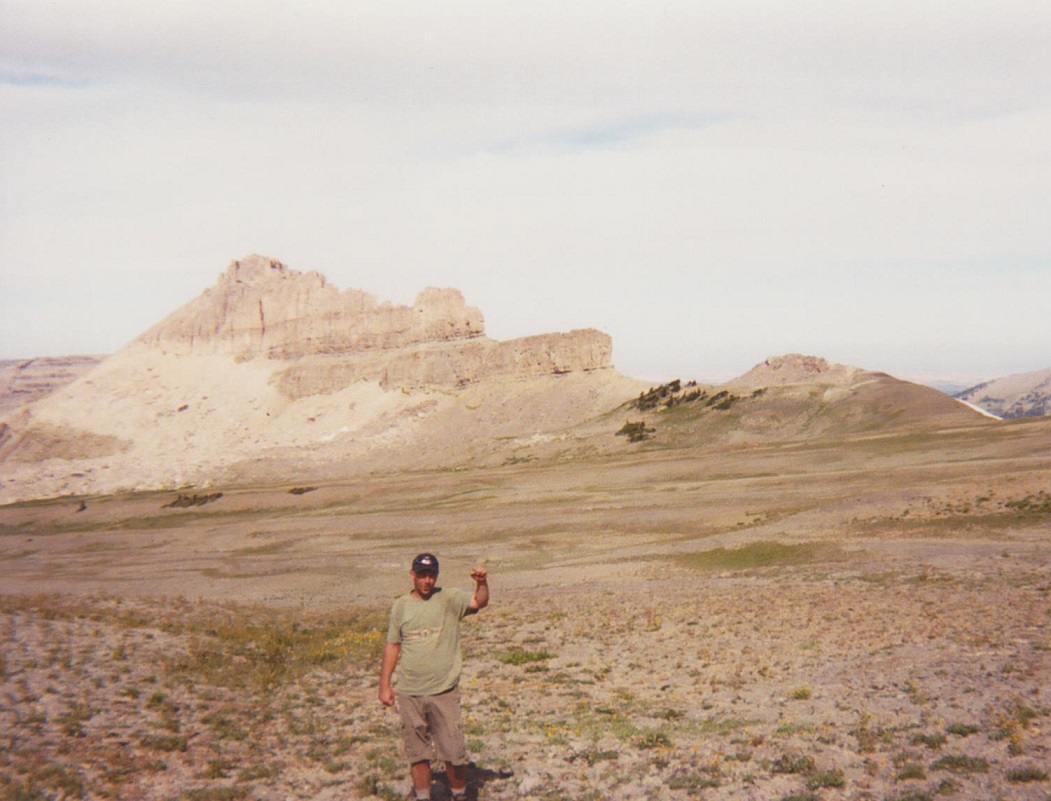 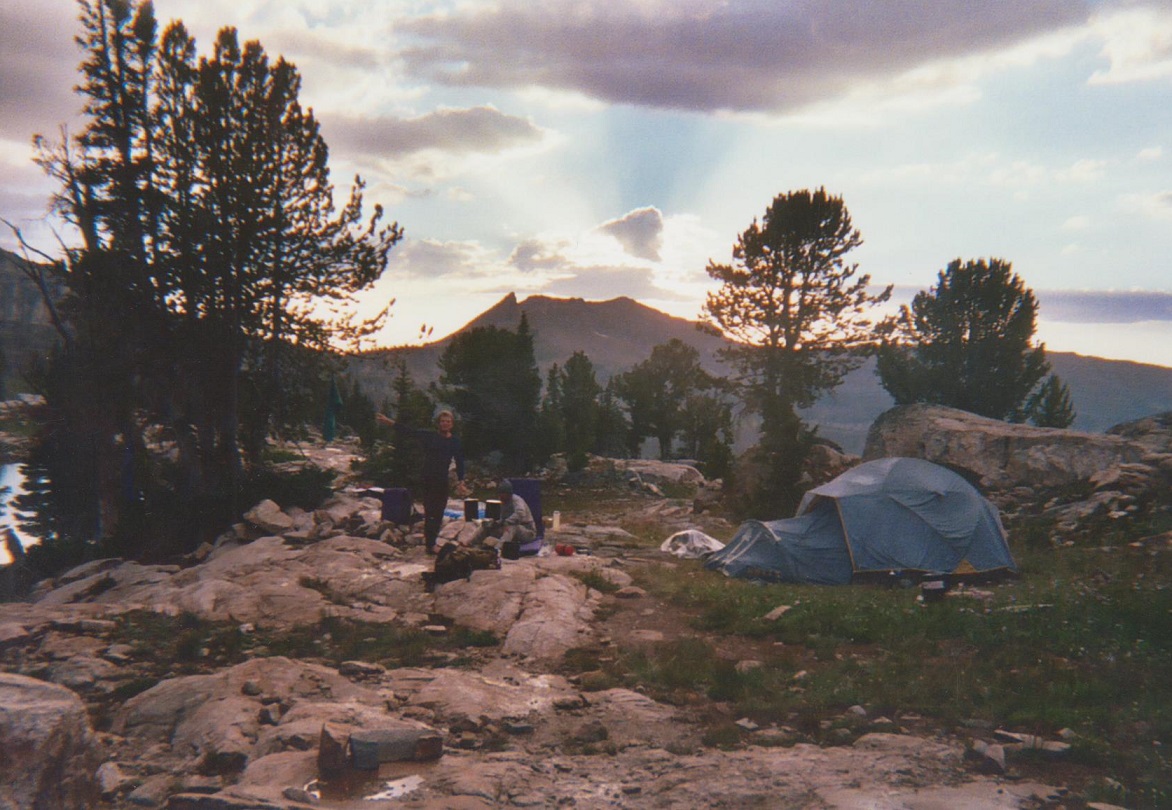 Perhaps we took too much time enjoying the views on top of the pass before we moved on. It was already late afternoon and we still had another 2.5 miles until we make it to our campsite.  This is a pretty strenuous 10-mile day, but that's what we planned. We are coming off a layover day and we are having another layover day tomorrow.  We knew it would be a long day, but the amazing part of backpacking the Grand Tetons and hiking this far north in the summer, the days are long!  The sun doesn't set until 9pm and there is still another hour of twilight.  There was never a concern of hiking at night.  We made it to Basin Lakes with plenty of time to make camp and cook dinner before it got dark. 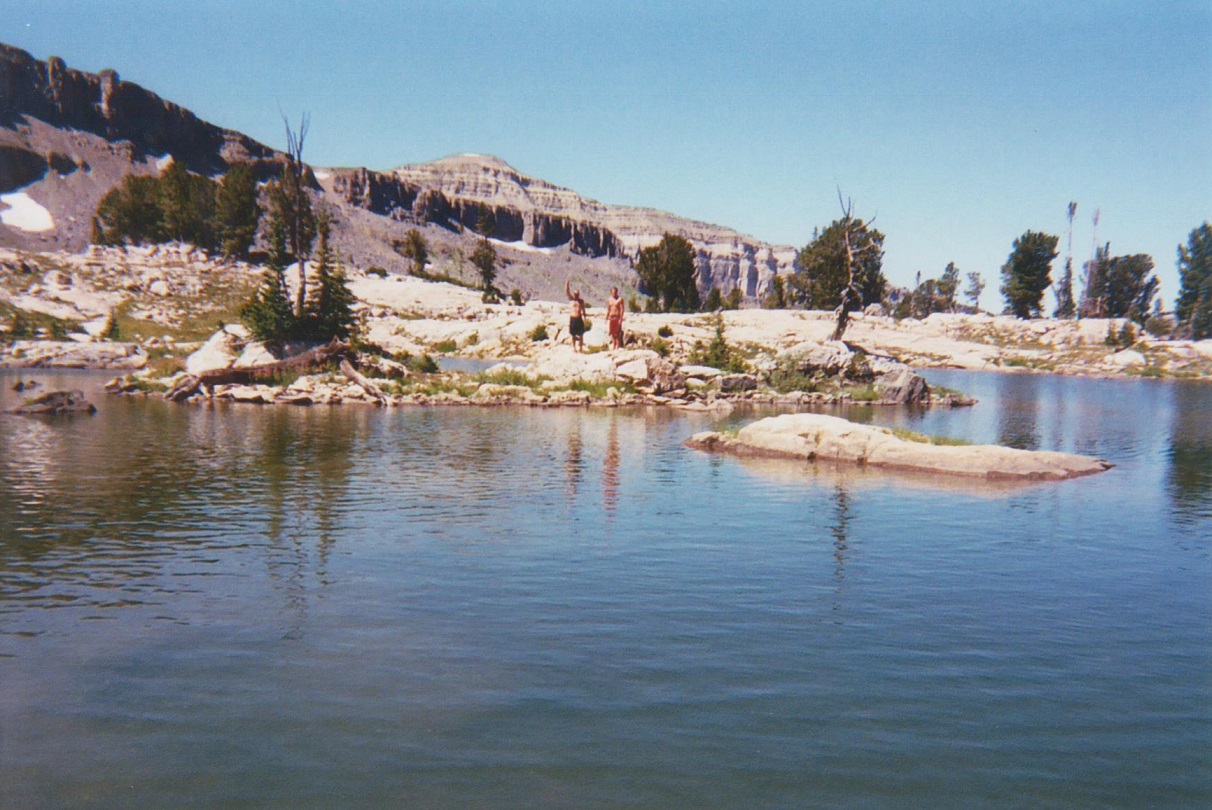 I know what you're thinking! Another layover day?! I said it before, this trip is our vacation, we aren't into rushing through it.  If we have a chance to have an entire day at some isolated, high elevation lakes in the back country with good fishing, we're going to take it.  Plus, backpacking the Grand Tetons isn't a long hike as far as mileage.  If you wanted to be in a hurry, you could hike though it in 3 or 4 days.  We are looking to do the exact opposite and extend our trip.  We do that by adding layover days at amazing water locations where we can fish and swim. 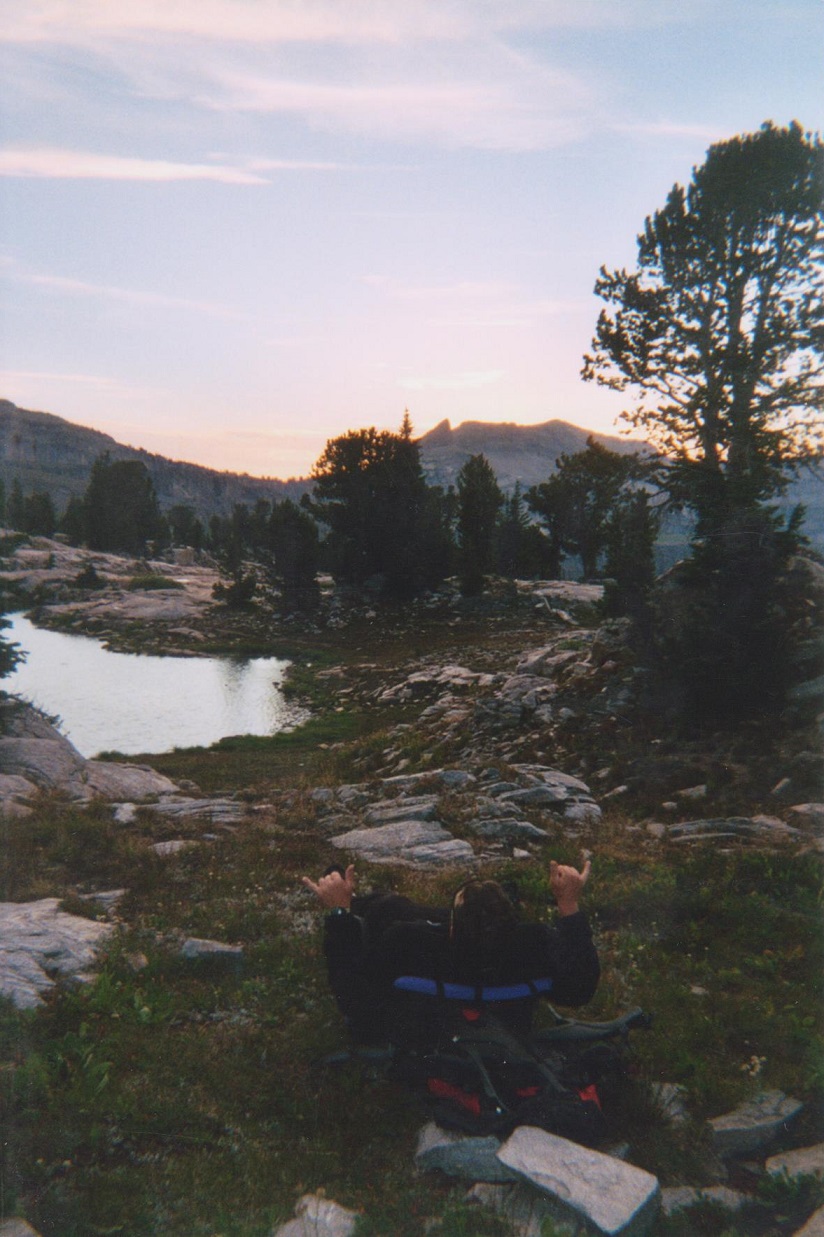 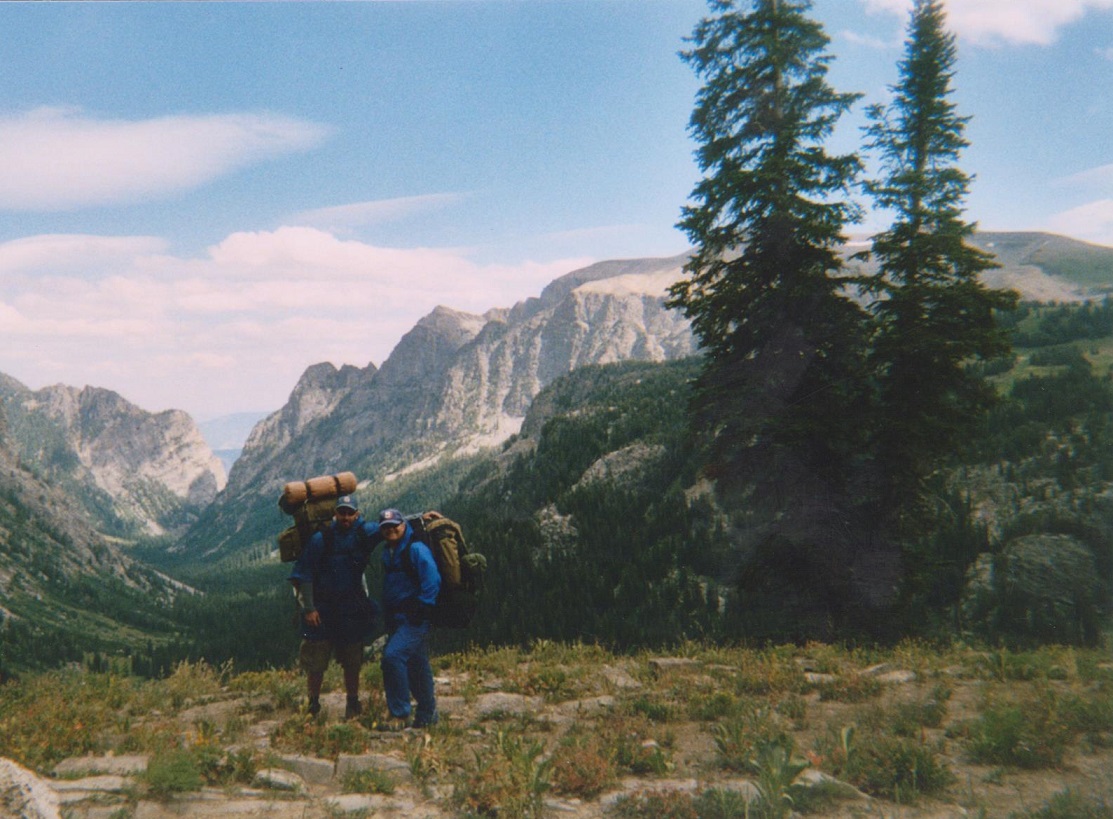 Once we leave Basin lakes, we ascend 1.5 miles until we get to Mount Meek Pass.  On the other side of the pass, you enter my absolute favorite part of backpacking the Grand Tetons, if not my favorite stretch of wilderness on ANY of my backpacking trips. 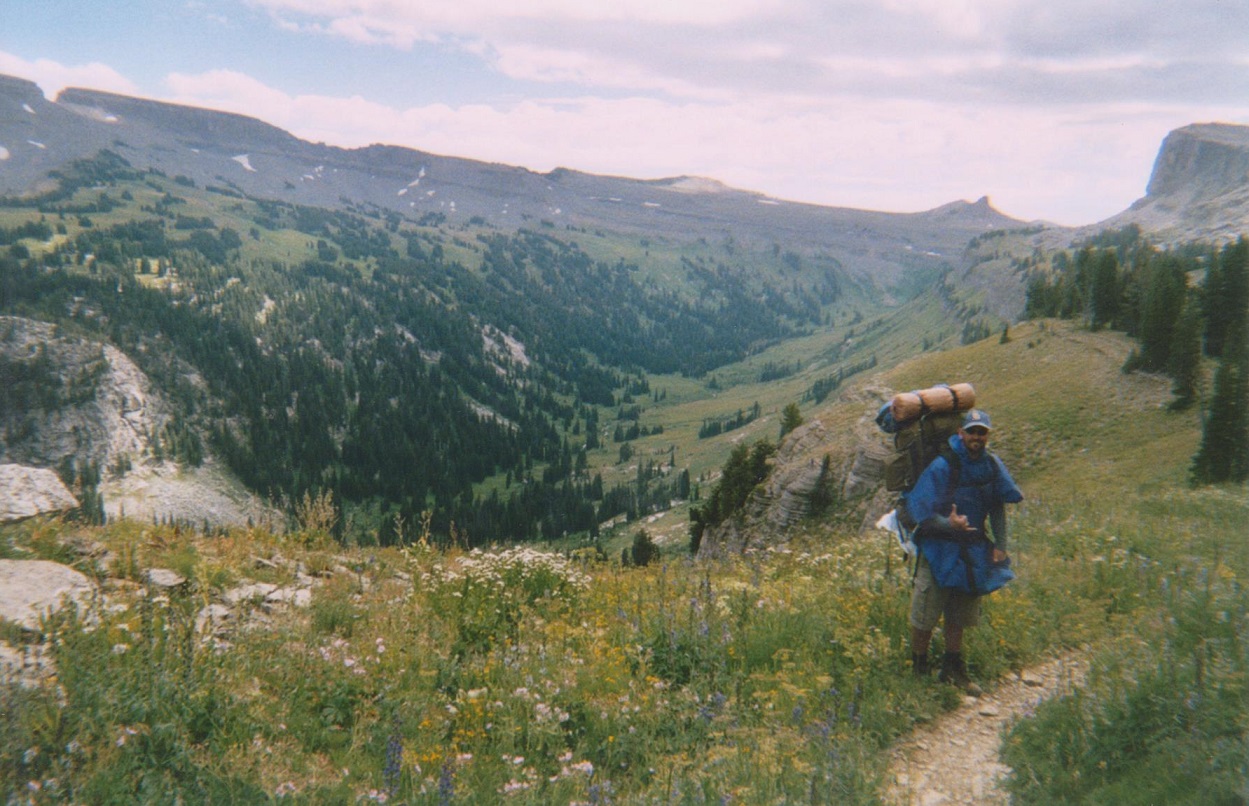 Once over the pass, you are placed on top of Death Canyon Shelf.  A 4-mile long shelf that hikes parallel to and looks down onto Death Canyon 600ft below.  Death Canyon is much different that Paintbrush or Cascade Canyon.  It's less rocky and rugged.  It's more of a green meadow bowl, dotted with evergreen trees scattered throughout it's rolling hills.

The shelf ends once you reach Fox Creek Pass.  Over the pass the landscape is similar to Death Canyon.  It's more green meadows, tall grasses and rolling hills.  A very pleasant 2.3 mile hike before our last nights camp location at Marion Lake. 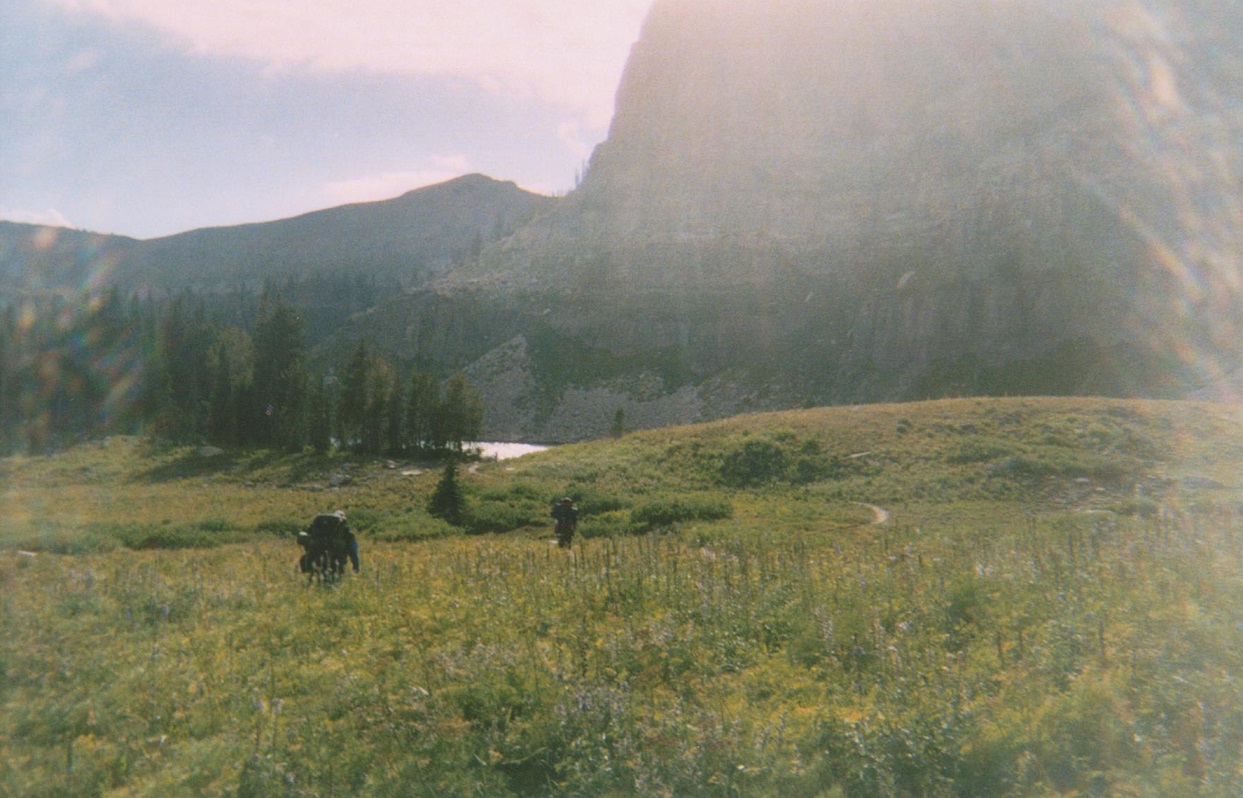 Our last day! We have a couple choices on our way out.  We could take a 10 mile all downhill route from Marion Lake that spits us out at Teton Village Lodge.  Or we can take a 6 mile hike to the top of the Jackson Hole Ski Resort and take the Gondola down to Teton Village. 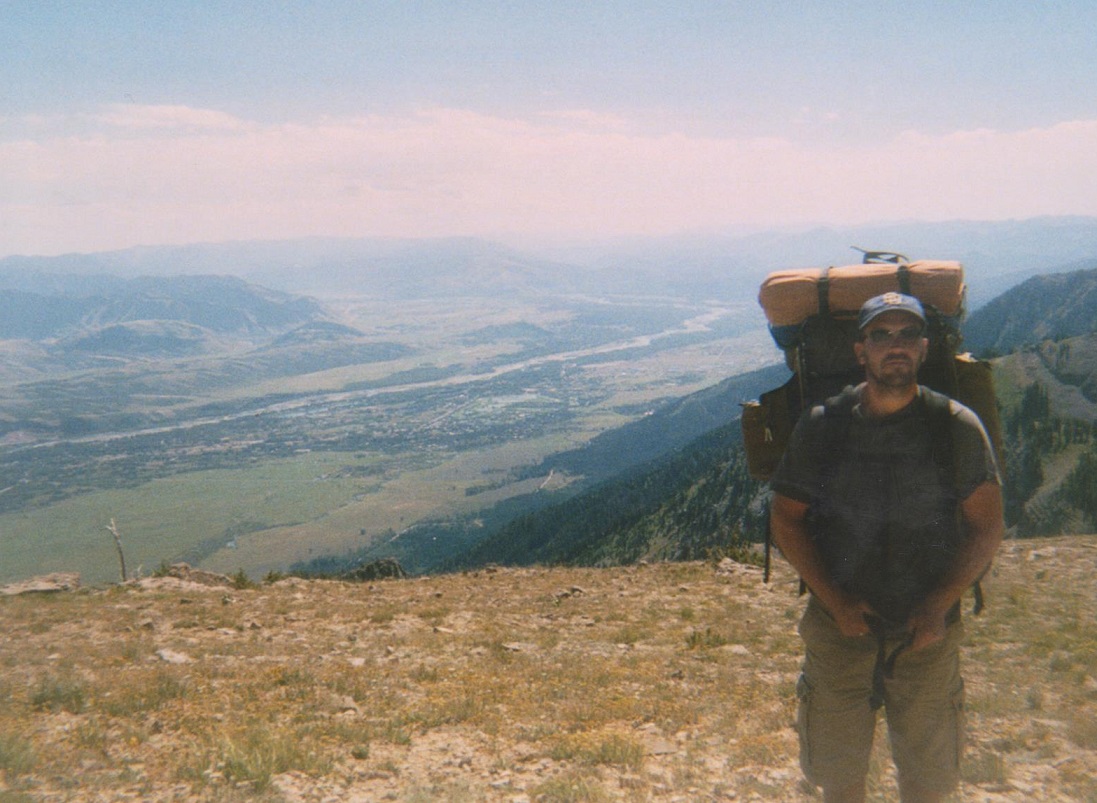 Above the Snake River

Taking the gondola means a 4 mile shorter route, but it also means we have to go up an extra 1500ft in order to get there.  We would have to get up, to get down!  As we are all about the experiences that each trip offers, getting a gondola ride home was a feature exclusive to backpacking the Grand Tetons! We were told the view from the top of Jackson Hole Ski Resort looking down on the Snake River with the city of Jackson in the background was amazing.  We weren't going to pass it up.

Celebrate the Completion of Backpacking the Grand Tetons 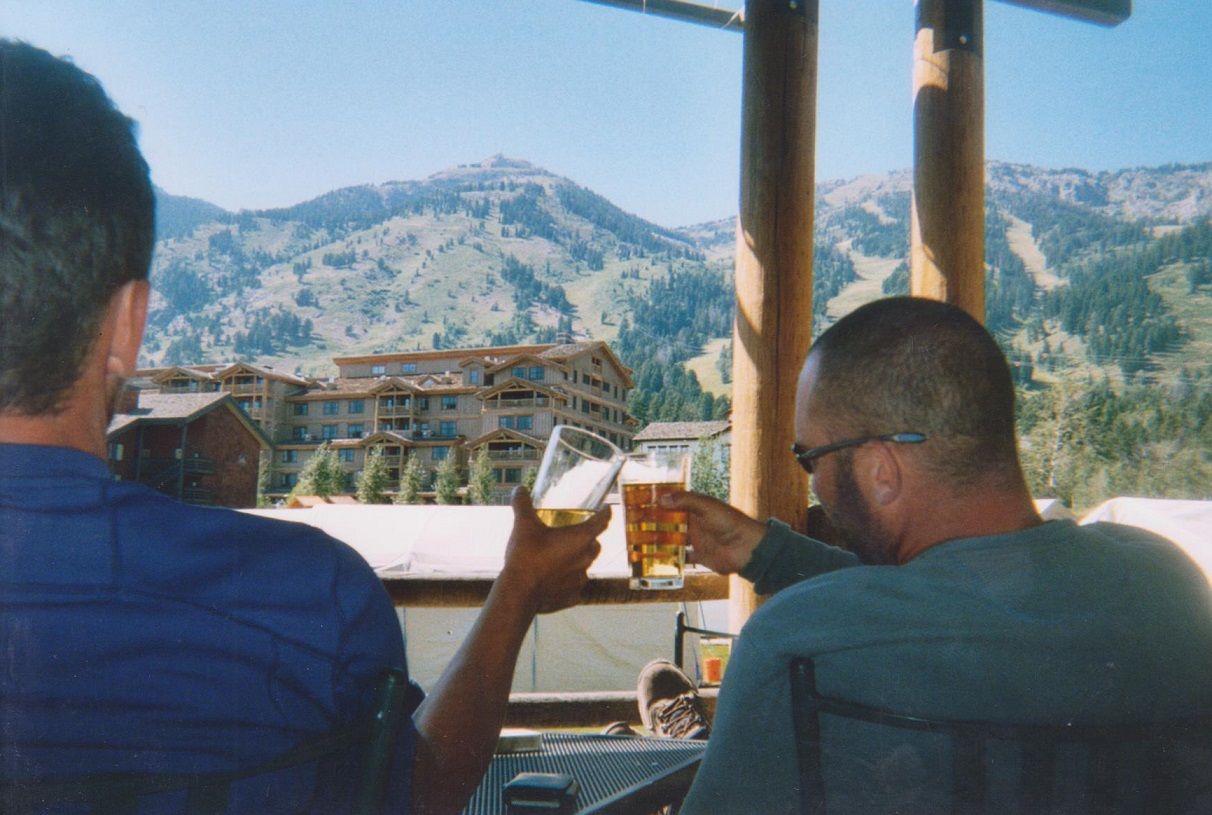 Not long after the Gondola reach it's destination at the Teton Village, we were celebrating the completion of our backpacking the Grand Tetons experience.  A couple of beers and the local delicacy, buffalo burgers!  We spent the next couple days in Jackson enjoying the city and visiting some friends.  Our friends happen to have had some inner tubes and a couple pontoon boats.  Our favorite post hike experience was we spent a day drinking beers and fishing while floating down the Snake River in an inner tube with Bald and Golden Eagles circling over head.  It was an amazing experience I highly suggest doing.